Declaration letters to the court can be crucial in child custody cases. They can even serve as your testimony if you have a trial by written declaration. Use our sample declaration letter, our downloadable template and the tips below to write yours.

A declaration letter is a statement of facts that a parent writes as part of a disputed child custody case. It's formal testimony that a judge considers when evaluating a parent's legal and physical custody requests.

A declaration letter declares a parent's intent in seeking custody orders. It summarizes the case, states the custody arrangements the parent wants and argues for those arrangements by showing how they support the child's best interests. 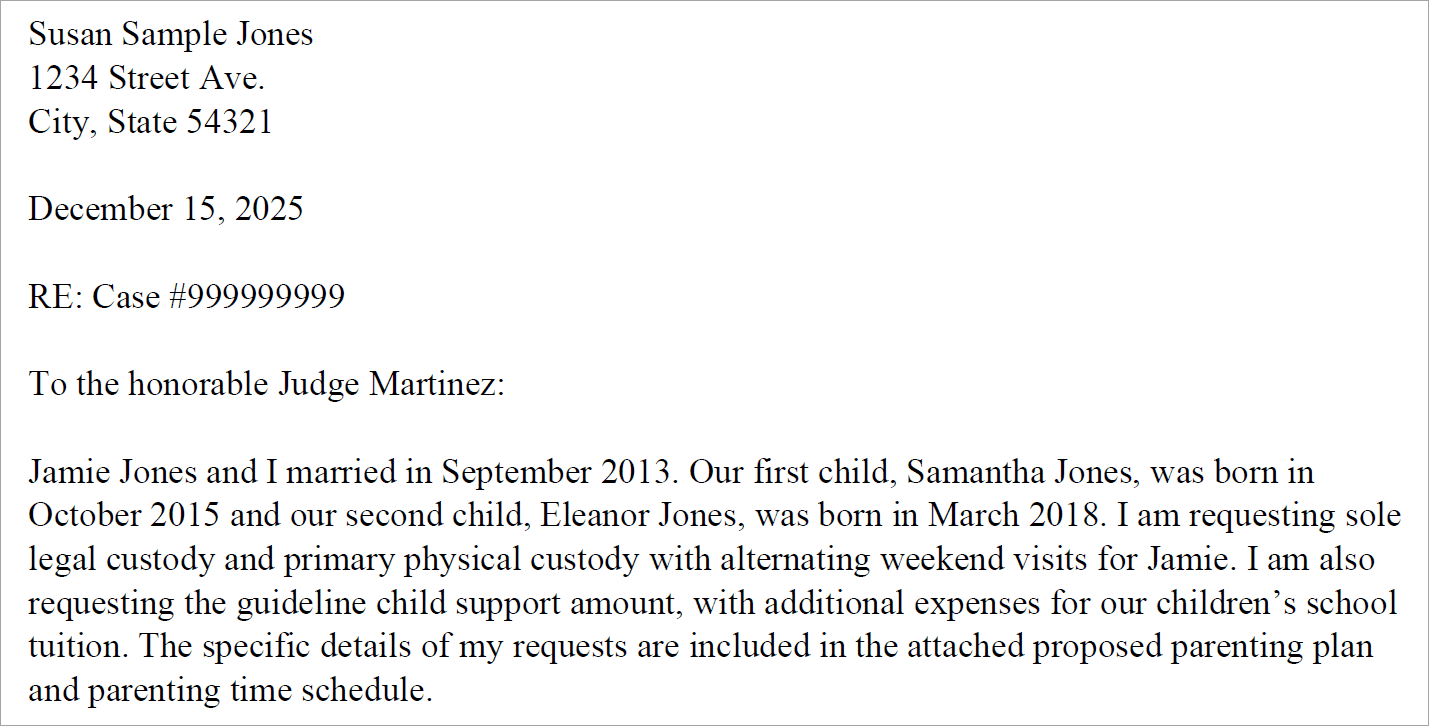 A declaration letter is different from a character reference letter, which is written by one of your witnesses.

When you may need to write a declaration letter

When parents can't agree on custody, a judge (or other court official, such as a magistrate) decides the custody orders. Each parent submits paperwork to the court detailing the arrangements they want, along with evidence to help prove that their proposed arrangement is best for the child.

Declaration letters from both parents are often part of this paperwork. They may be required, depending on your state, court and judge.

Judges often use declaration letters to get background information in preparation for a hearing in which parents can offer additional testimony.

However, some courts don't hold a hearing — instead, the judge decides custody based solely on each parent's declaration letter and submitted evidence. This process, sometimes called a trial by written declaration, is common in states and counties that have busy family courts. It also became more common during the COVID-19 pandemic, and some courts are continuing this practice.

If you're writing a declaration letter, be sure you're clear on exactly how the judge is going to use it to decide custody — in preparation for a hearing or to make the final decision.

How to write a declaration letter for child custody

No matter how the judge uses your letter, its stakes are high.

It's crucial that you write an effective, error-free letter that meets all of your court's requirements. Be sure to research your state's child custody process and your court's declaration letter rules. Give yourself plenty of time to write and revise multiple drafts so you can present the best possible statement to the judge.

Your letter should be well-organized and specific to your situation. It should demonstrate your genuine commitment to being a good co-parent, make a thoughtful argument in favor of your custody arrangement and show that you prioritize your child's best interests.

If you have a lawyer, they'll provide guidance on what to include in your letter and, possibly, edit it. However, they shouldn't write the letter for you, since it's your sworn testimony and judges want to hear from parents, not their lawyers.

Heading & salutation: Use the formatting preferred by your court (e.g., business letter or legal document format). Include the personal information your court requires, such as your case number. To address a judge, write "To the honorable Judge," followed by the judge's last name. 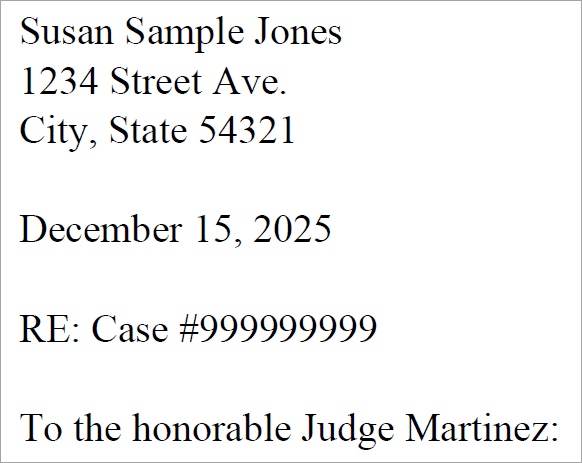 Introduction (1 paragraph): State when you and the other parent married (if divorcing) or when you began your relationship (if unmarried). Add when you separated or decided to divorce. Include your children's names and birth dates. Finish the introduction with a one- or two-sentence summary or bulleted list of the custody arrangements you're requesting.

Background (1-2 paragraphs): Give the judge more information about your case. Explain how parenting worked before separation and how co-parenting has worked since separation.

Include information about each parent's work and their work schedule, how expenses are paid, if your child has special needs, the major disputed issues, etc.

Supporting facts & examples (3 or more paragraphs): Explain why your proposed parenting plan and time schedule is best for your child. Give examples of how both parents approach parenting.

If you're attaching evidence (photos, official records, parenting time reports, messages, etc.), explain each exhibit and how it supports your requests. This is the bulk of your letter — it can be several paragraphs or multiple pages.

Be sure to address all of your requests, including child support.

Conclusion (1 paragraph): Clearly restate your custody requests and why they're in your child's best interests.

Sworn statement/oath (1 sentence): You must swear that everything in the letter is true. Check with your court to see if they require certain wording. If your court requires letters to be notarized, don't sign until you're with the notary public or court clerk.

How to format a declaration letter

Your local court — and possibly your judge — will have specific formatting rules for declaration letters and other statements submitted to the court. Your court may prefer that you use standard business letter format, or it may want you to use legal document formatting.

Either way, make sure to follow their rules precisely. These will most likely include requirements for font style and size, margins, line spacing, page numbers, evidence labeling and more. Some courts might also want you to use specific headings.

If you're submitting your letter electronically, you may have to submit it as a certain file type (e.g., PDF).

Pay particular attention to your court's and your judge's page-length requirement. Declaration letters are often multiple pages, especially if the case is complex and there's a lot of evidence to explain.

For example, California limits declaration letters to 10 pages (not including attachments). However, many judges prefer letters to be no more than five pages. Ask the court clerk or your lawyer for guidance on length.

Downloadable template and sample letter to a judge

Below, find a fill-in-the-blank template, as well a detailed example of a declaration letter. Keep in mind that court requirements and preferences vary.

Other tips for writing a declaration letter

In addition to proving why your custody arrangement is best for your child, your letter should demonstrate to the judge that you're a responsible and competent co-parent. To do this, keep these additional tips in mind:

The tools you need for custody court

The Custody X Change app has many co-parenting features and tools to organize evidence and help you win child custody.