Child custody includes both physical and legal custody. Physical custody encompasses where the child lives and who cares for them.

When to have sole custody arrangements

Parents should have a sole custody arrangement when: 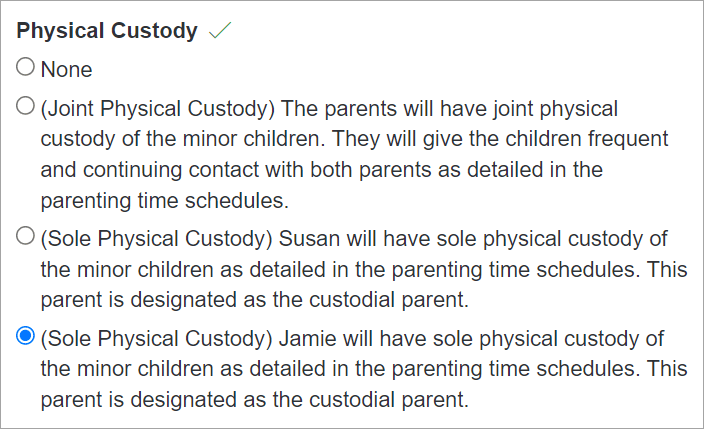 If you have a sole physical custody arrangement you need to make a visitation schedule that shows when your child will spend time with the noncustodial parent.

You can add midweek visits or overnights to any of these schedules to modify them to fit your needs.

Remember that joint custody doesn't mean that both parents get equal parenting time with the child. If you want sole custody because you want your child to live primarily with you, you may still be able to have the living arrangements you want with joint custody. Your state custody guidelines can help you know how to proceed.

You can still seek sole custody in a state that prefers joint custody. If you have clear and compelling evidence that your child will do better with sole custody, the court will likely grant it.

Pros of sole physical custody include:

Cons of sole physical custody include:

Designating sole physical custody in your plan is easy. In the app, click the "parenting plan" tab. More than 25 categories of parenting provisions will appear.

Now you're on your way to a professional-quality document for managing your child's custody.