Custody refers to both the legal and physical custody of a child. Legal custody is the authority to make decisions for and about a child.

The alternative is sole legal custody, where one parent has full responsibility to make major decisions for the child.

You need to specify in your parenting plan which legal custody option your family will use. This determines who makes decisions about your children's education, medical care, religion and more.

Joint legal custody is a way to give both parents a say in their child's upbringing. It is meant for cases in which both parents are able and available to make important decisions. 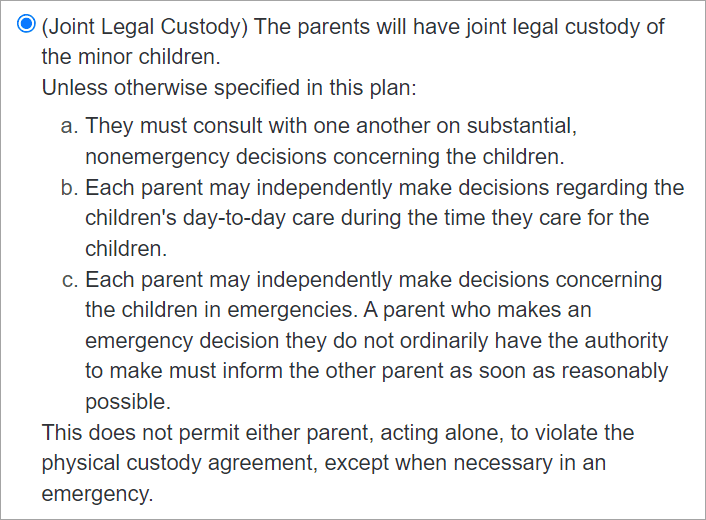 How joint legal custody is shared

There are many ways parents can share legal custody. Your court may let you decide the specifics, or it may use one of the arrangements below (or a variation) as standard.

Option 1: Parents collaborate on all decisions, whenever feasible. For example, the parents decide together what school their child will attend and whether the child will go on a field trip.

Option 2: Each parent makes decisions for the child when the parent has physical custody. For example, if a teenage daughter asks about birth control while with one parent, that parent can decide whether to take her to a doctor.

When parents work together to make key decisions for their child, the child ultimately benefits.

Continual communication among the child and his or her parents helps prevent isolation and other psychological issues that could stem from a feeling of loss following a divorce or separation. This allows a child to feel loved by both parents and important to them.

Children who see their parents interact positively, as joint legal custody requires, learn to compromise and work through disagreements. A child is more likely to have a healthy self-esteem if his or her parents are able to collaborate.

Sharing legal custody can also alleviate the burdens of parenting. Having the other parent's input in difficult decisions can be welcome.

If you know that you and the other parent would not be able to share responsibilities regarding your child, joint legal custody is not for you.

For some separated and divorced partners, an acrimonious relationship makes collaborating or even communicating with one another difficult. Family tension can hinder a parent's ability to make decisions in the best interest of their child.

Another thing to consider are the sacrifices joint legal custody can require. For example, you may want to limit your job search to areas near your child to make joint decision-making easier.

When parents share fundamental values, it's easier for them to make effective decisions regarding their child's school, extracurricular and religious arrangements.

Co-parenting is less likely to be adversarial when parents are on roughly the same page regarding their children.

Designating joint legal custody in your plan is easy. In the app, click the "parenting plan" tab. More than 25 categories of parenting provisions will appear.

Now you're on your way to a professional-quality document for managing joint custody of your child.