A character reference letter to the court can be an important part of a disputed custody case.

If you're a parent pursing child custody, it's important you understand who you should ask to write a letter and how it can impact your case.

If you've been asked to write to the judge, use our sample character reference letter and fill-in-the-blank template.

Sometimes simply called a character letter, this letter is official legal testimony used as evidence in some child custody cases.

A character reference letter gives the judge insight into the case by offering a third party's perspective on the parent's relationship with the child. It also gives the judge more information about who the parent is, how they take care of their child and why they should have custody. 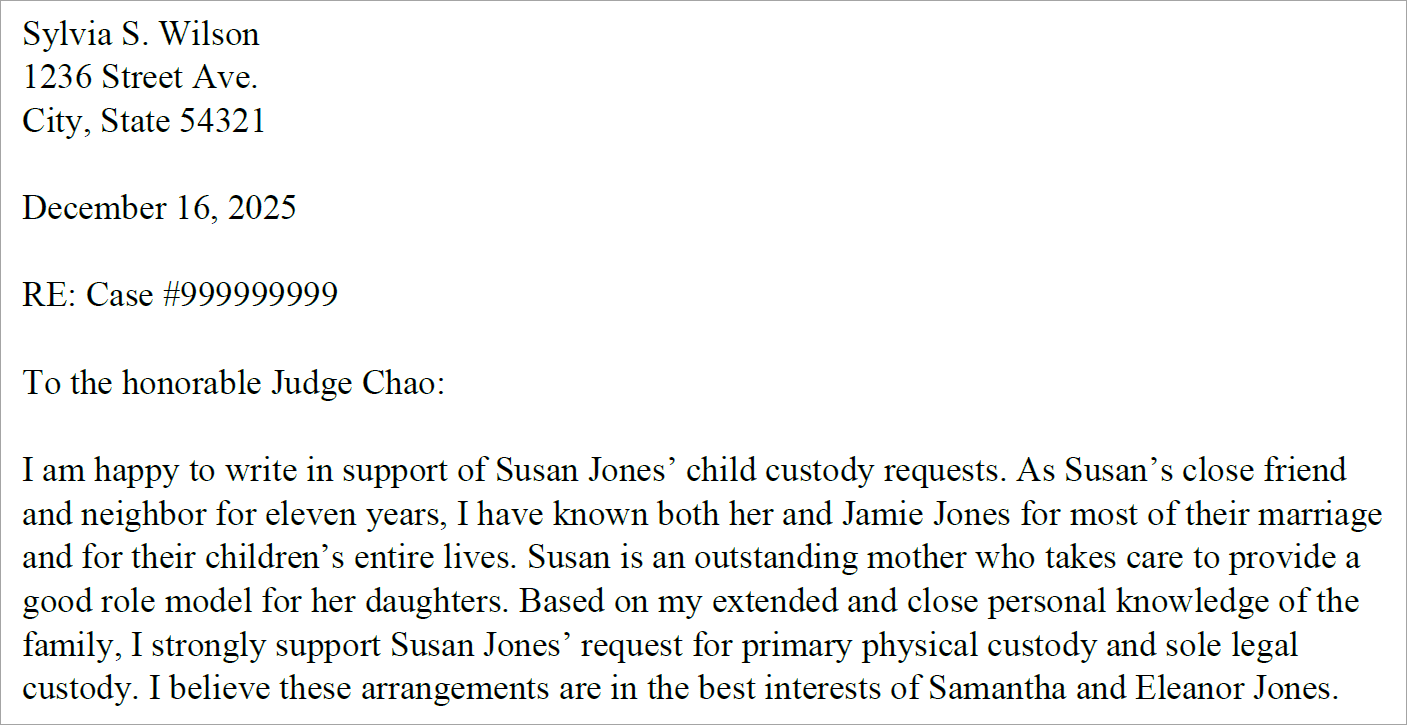 When you may need a character reference letter

When parents can't agree on custody, a judge (or other court official, such as a magistrate) decides the custody orders. Each parent submits paperwork to the court detailing the arrangements they want, along with evidence to prove that their proposed arrangement is best for the child.

Both parents can submit a character reference letter as part of this paperwork. The letters are typically optional, but one can go a long way in helping the judge understand you and your parenting.

In high-conflict cases where parents make allegations against each other, character reference letters can help the judge get more information.

Who should write a character reference letter for a custody case

Your character reference letter writer is a witness on your behalf — they should know you well, have first-hand knowledge of your relationship with your child and support your custody requests. They should be someone who has frequently observed your parenting and who can authentically speak to your character.

Common character letter writers include close relatives, friends, co-workers and supervisors. You might also ask your child's teacher or caregiver if they know you well and have personal knowledge of your parenting. Be sure to choose someone who has known you for several years and who is credible in the eyes of the court.

If you want your character reference letter to address substance abuse or a similar issue, you might ask your sponsor or therapist. Just make sure they have observed you interacting with your child.

If you have a lawyer, they'll give you guidance on whom you should ask and what issues the letter should address. They may advise you to get letters from more than one person.

Tips when asking someone to write a character reference letter

When asking someone to write a character reference letter for you:

If you've been asked to write a character reference letter to a judge in a custody case, be sure you're clear on the court's requirements and exactly what your letter needs to include.

As you prepare to write, brainstorm what you know about the parent and make a list of information and examples you want to include. Create an outline to organize your ideas.

After writing a draft, make sure you followed your outline and the organization flows logically. Use spell- and grammar-checking tools, and proofread carefully.

Remember that writing a character reference makes you a witness in the case, so take your role and the letter seriously.

How to format a character reference letter

A typical character reference letter has the following organization.

Heading and salutation: Use business-letter formatting and include information required by the court, such as the case number. The proper form of address for a judge is "To the honorable Judge," followed by their last name. 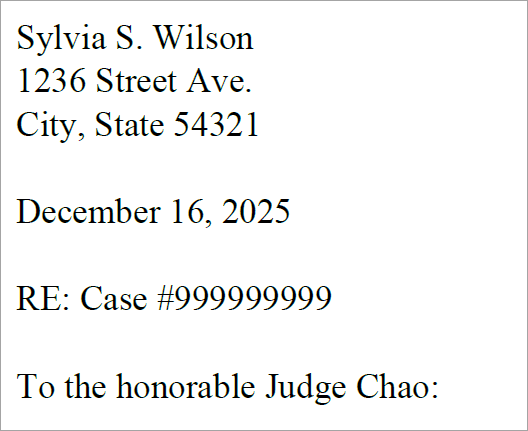 Supporting facts and examples (2–3 paragraphs): Give more details about how you know the parent, your assessment of their character and their relationship with their child.

Share examples that demonstrate how the parent cares for their child and supports their best interests. Highlight the parent's strengths, and show how they play an active role in their child's upbringing and overall well-being. Be specific, and focus on the parent–child relationship.

Conclusion (1 paragraph): Clearly restate your support of the parent's custody requests. Reiterate their strengths and commitment to supporting their child's best interests.

Closing & signature: Thank the judge for their time and consideration. Sign as you would a business letter. You typically don't need to have your letter notarized.

Keep in mind that some courts or judges prefer confidential letters with the writer's signature across the envelope seal (proving that it hasn't been opened). Ask the parent for whom you're writing the letter if this is necessary.

The tools you need for custody court

The Custody X Change app has many tools to help with your child custody case.