In Scotland, cases about child arrangements are heard at the Sheriff Courts.

They're handled separately from divorce cases in order to encourage parents to agree on child arrangements out of court. Judges generally don't want to make decisions about parenting and believe parents know what's best for a child.

Sheriff Courts and the family judicial system have recently undergone their biggest reform in a century. The court process has been streamlined and new legislation has been introduced to strengthen children's rights and further protect domestic abuse victims.

It is important to be aware that the process is ongoing.

Before applying for a court order

When you can agree with the other parent, you should make a parenting plan (which includes a residence and contact schedule) to avoid court altogether. Consider any plans or agreements you make with the other parent carefully, as the judge will likely ask to see them if you eventually go to court.

If you can't agree on your own, the courts will expect you to try alternative dispute resolution (ADR) methods, unless your relationship involves domestic violence.

Where court is the last remaining option, you should seek legal advice — at least at the start — because family cases follow a complex set of rules and processes called ordinary cause procedure. Parents with low incomes may qualify for free legal aid.

If you are representing yourself, make sure to stay extremely organised.

You can end the legal process at any point if you reach an agreement with the other parent. Then your solicitor can help you make the agreement legally binding through a Minute of Agreement.

You should open your case at the Sheriff Court nearest to where the child lives. You can download the forms you'll need, and you'll need to pay a fee.

To open a case, you must draft an Initial Writ, which states what court orders you want and why you are asking the court to step in. It is recommended you have a professional draft this, but if you can't, use the form the court provides. 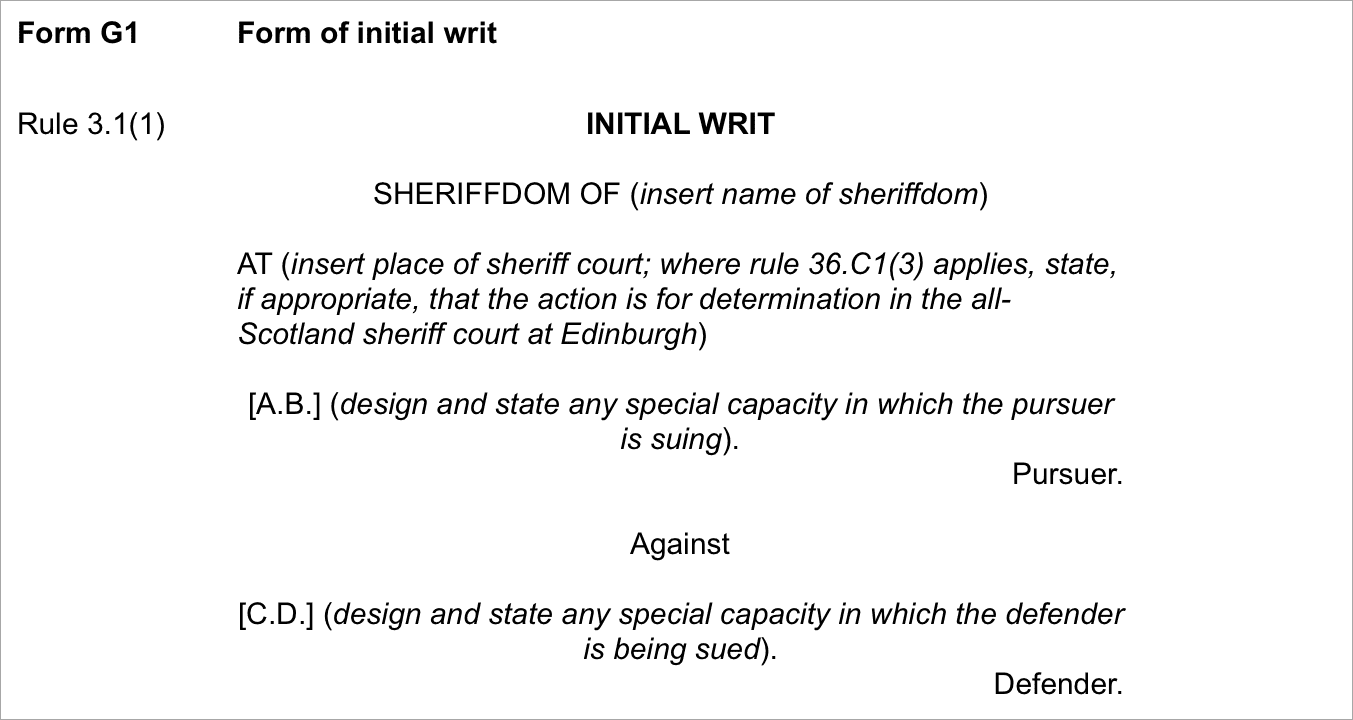 If the defender intends to dispute, they must lodge their Notice of Intention to Defend (NID) to the court clerk within 14 days. The NID provides the defender an opportunity to tell their side of the story.

Once the NID is lodged, parents have six weeks to make any adjustments to their submitted documents, which are then combined and called the record.

The court then fixes a child welfare hearing.

A child welfare hearing is when the judge hears from both parents (normally via solicitors) to gather enough information to decide next steps. Most cases have multiple child welfare hearings several weeks apart, so any decisions made will be under constant review for the length of your case.

Child welfare hearings usually take place in the judge's office rather than in a courtroom, and no evidence is presented. Only parents, their solicitors, the judge and the judge's clerk attend — plus an optional lay representative or courtroom supporter, if a parent has no solicitor.

Though the hearings can be short and somewhat informal, you should still follow courtroom etiquette.

The judge might make an interim order (or, rarely, a final order) about your child's arrangements. The judge usually sists (suspends) the case afterward to allow time to see how the interim order works.

Judges often prefer to give orders in a hearing (versus in a proof — Step 5), as the less formal setting allows them to work directly with parents to reach the best solution.

In most cases, an interim order serves unofficially as a final order, and the case essentially ends here. You would only need to contact the court again to enforce or amend the order.

Another way to avoid returning to court is to put the interim order's terms into a document called a Minute of Agreement — as long as both parents agree. Then you or your solicitor would register it with the Books of Council and Session to make it a final order.

If the other parent might put the child at risk or take the child out of the country, you could be granted an expedited order (such as a Specific Issue Order or an Interdict) at this point in the court process.

If you agree on a parenting plan prior to the child welfare hearing, a solicitor can turn the document into a Minute of Agreement. At the hearing, the judge can sign off to make it a final order if the terms are in the best interests of your child.

The judge may ask a child welfare reporter to investigate. An independent reporter (usually a family solicitor) visits the parents' homes and speaks with people in the child's life, including the child, if old enough. The case cannot proceed until the reporter submits a report to the court.

Depending on how complex the case is, a reporter costs between £3,000 and £5,000, usually split equally between parents. Legal aid can cover this cost if you qualify.

Here, the judge talks with the parents to find out what issues still cannot be agreed upon and why. The judge presents your remaining options and may help you attempt an 11th-hour agreement. If agreement seems improbable, they'll set your case up for a proof.

The judge cannot make orders at this hearing.

A case management hearing, normally held in the judge's office, is designed to streamline your upcoming proof.

The judge will expect a preview of evidence you'll present at the proof — e.g. a parenting journal, a parenting time report or messages between parents.

The judge will ask about your witnesses and their availability, as well as what facts (if any) you agree on with the other parent.

Proof is a word in Scots law for a trial or final hearing. Proofs only happen in child arrangements cases when disagreements are exceedingly complex.

At a proof, witnesses can be called up and questioned by both parents. The judge listens to all the evidence, and then both parents enter their final submissions — the evidence from the entire case in one folder.

The judge takes some time to prepare a verdict. Their decisions go into a final order, which is binding on both parents, though you may later seek to amend it.

The judge bases decisions on the best interest of the child and doesn't alter any aspect of the child's life unless absolutely necessary.

It is crucial you see a proof as a worst-case scenario and do your best to reach an agreement with the other parent instead.

You may want to present the judge with a calendar of when you care for your child, a list of parenting expenses, a parenting journal and more.

The Custody X Change app lets you create and manage all of these elements in one place. It helps you prepare for every step of your case.

Take advantage of our technology to get what's best for your child.