It commemorates the 1865 arrival of Union troops in Galveston, Texas to announce that the Civil War had ended and slavery had been abolished.

When Juneteenth falls on a weekend, schools and businesses close the Friday prior or the following Monday, rather than on the 19th.

To prevent conflict and confusion, your holiday schedule should cover years when Juneteenth falls midweek and years when it creates a long weekend.

One option is to alternate who gets the holiday depending on whether it's an even- or odd-numbered year. 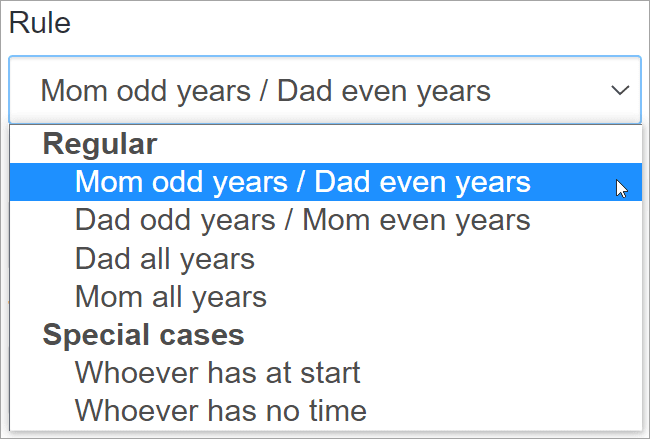 Alternate holidays within a year

Whoever didn't have custody on the previous holiday (likely Memorial Day or Father's Day) could have the child on Juneteenth. Then the other parent would get the next holiday with the child.

In years when Juneteenth creates a long weekend, you can include it in a rotation of three-day weekends. For example, one parent might have President's Day and Juneteenth, while the other has Memorial Day and Labor Day.

Make it a fixed holiday

You might agree to give one parent custody every year. The holiday might go to the parent who celebrates Juneteenth or the one who typically spends less time with the child. 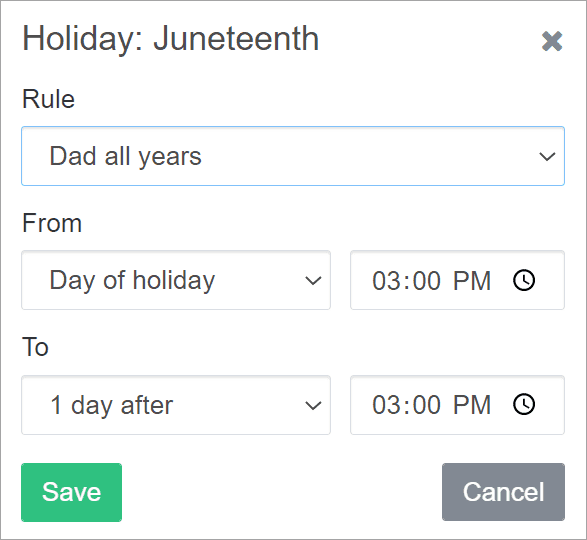 You might choose to split the day (or the three-day weekend, if Juneteenth lands on Friday, Saturday, Sunday or Monday). You can split the time evenly or according to your normal parenting time division — e.g., 70/30.

If you are splitting just the day, for example, your child could spend the morning with the parent who had custody the previous night and then spend the following afternoon and evening with the other parent.

A good way to account for holidays that move from year to year is to agree to multiple arrangements.

For example, your agreement could state: "When Juneteenth is celebrated on a Friday or Monday, the parent who does not have the weekend in the regular schedule gets the holiday. When Juneteenth falls on another weekday, Mom and Dad split the holiday."

Be sure to include exact exchange times.

Parents who get along may choose to celebrate Juneteenth together. This is a great option for parents who celebrated together before they split up. It can give your child a reassuring sense of consistency.

The easiest way to make a holiday visitation schedule

There's a lot to think about when you build a holiday schedule. You'll want it to address weekend and midweek holidays, reflect special occasions unique to your family (like birthdays) and work for years to come.

To make a custody schedule quickly and affordably, turn to Custody X Change. You'll get written and visual versions that meet your family's needs, as well as court standards.