Child custody statistics have historically been scarce. Custody X Change, which makes software for separated and divorced parents, undertook this research as a result.

The study looks at all 86 judgments entered for divorce cases affecting minor children in a one-month period this summer in Hennepin County. In 88 percent of the cases, parents settled, agreeing on at least some of the terms of their divorce.

Often, parents in Hennepin County stayed flexible. The court allowed parents to improvise a schedule from day to day in nearly a third of cases. 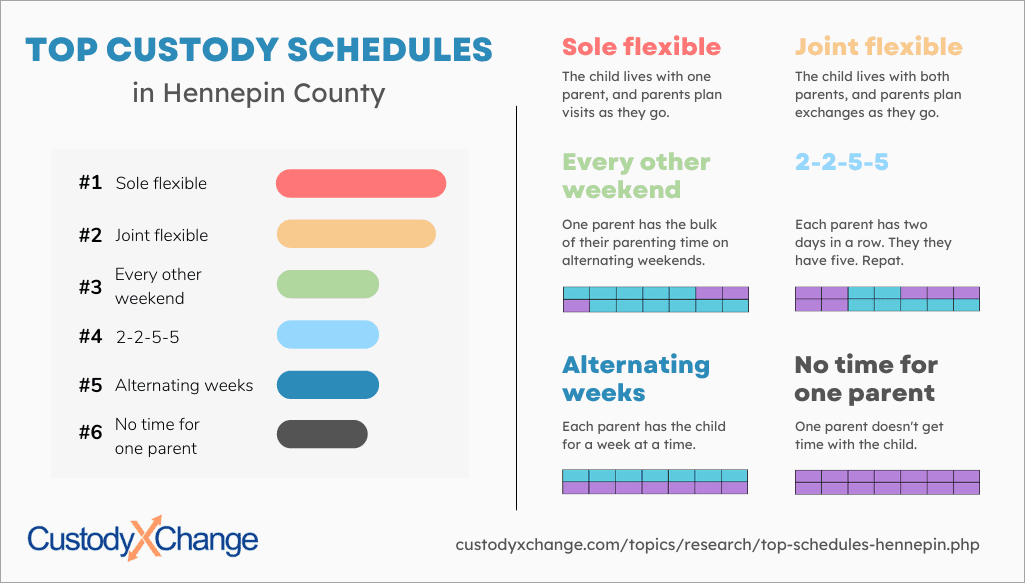 When parents did have a set schedule in their court order, three schedules tied for most popular:

Each of these was awarded in 9 percent of cases.

The next most common arrangement was for one parent to receive no time with their child at all. This happened in 8 percent of cases, often because the parent chose not to participate in the legal process.

"Overall, families in Hennepin County have custody schedules more often than not," said Ben Coltrin, president and co-founder of Custody X Change. "There's a lot of variety in those schedules, which makes complete sense because families vary too."

There's a clear trend in vacation arrangements for divorced parents in Hennepin — in nearly a third of cases, each parent was allowed to take their child on vacation for two weeks a year. (In some, this time couldn't be used in one block.)

In 12 percent of cases, one parent would not be able to take the child on vacation at all because they received no parenting time or no unsupervised parenting time.

Another 10 percent of the judgments did not put a cap on either parent's annual vacation time with the child.

More than 40 percent of the court orders did not answer the question of how vacations would work, and the remaining cases had unusual arrangements, like allowing each parent two days a year.

"We recommend addressing vacations in your parenting plan except in the most amicable divorces," Coltrin said. "Having set parameters prevents conflict and helps you plan ahead for trips."

Holiday custody schedules are complex because holidays are so diverse. Most parents don't handle custody over Thanksgiving the same way they handle it on Presidents Day, for example.

About a quarter of court orders didn't mention holidays at all.

How the research was done

Hennepin County Courts provided a list of cases that had final judgments entered between August 22 and September 20, 2022. Custody X Change researchers read through each judgment.

When a schedule was set to change in the future, this study looked only at the initial version.