What is sole custody?

If a parent has sole physical custody, their child lives with them full-time and has visits (potentially supervised visits) with the other parent, unless the court finds that visits wouldn't be in the child's best interest.

If a parent has sole legal custody, they can make all major decisions regarding the child without consulting the other parent; this includes decisions about medical care, education, religious upbringing and moral development. The other parent can still make small, day-to-day choices when caring for the child. 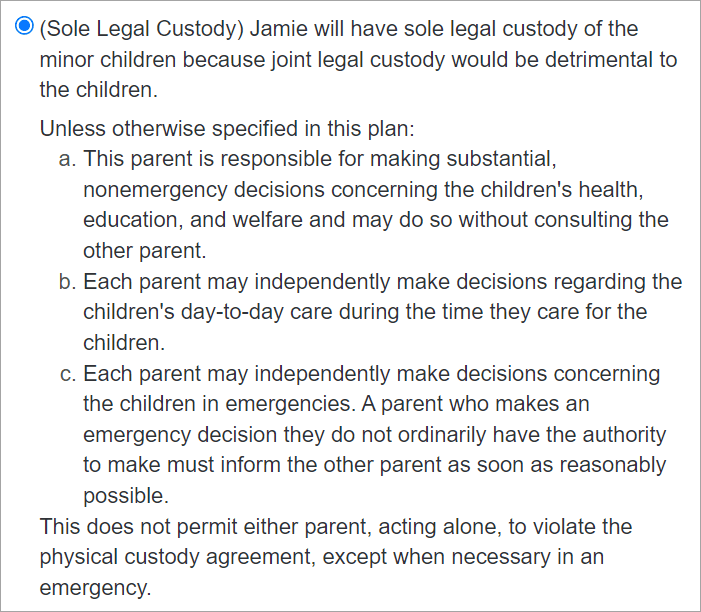 When should I seek sole custody?

The clearest reason to ask for sole custody is to protect your child from physical harm, especially if the other parent has a history of any of the following issues:

ABUSE: If a parent has assaulted or sexually abused the other parent or any child, this presents an obvious danger to their child.

NEGLECT: If a parent has previously neglected the child, this neglect could continue in the future. Neglect is the failure to provide a child with necessary medical care, dental care, supervision, food, clothing, shelter or other safeguards to protect the child's well-being.

SUBSTANCE ABUSE: A parent who abuses drugs or alcohol presents a danger to the child. The altered mental state that occurs as a result of substance abuse prohibits the parent from being able to properly care for the child.

MENTAL ILLNESS: A child should be protected from a parent who is mentally unstable and exhibits irrational and unpredictable behavior. For example, a child should never be left with a suicidal parent.

There are also reasons to obtain sole custody beyond protecting the child physically:

ABANDONMENT: Sometimes parents can't or won't take care of their child. If a parent has shown little interest in their child and has failed to maintain contact with them, you may want sole custody so the parent can't resurface years later to exercise custody rights as a virtual stranger.

INCARCERATION: If a parent is imprisoned, they cannot provide a home or care for the child. In this case, you may want to seek sole custody, and the other parent can have visits with the child after their release from prison, if appropriate. Don't feel obligated to take your child to visit a parent in prison if you feel it may harm the child emotionally.

RELOCATION: If a parent plans to move out of the state or country, it may be best for one parent to have sole custody.

Above all, sole custody should be for the good of the child, not for depriving the other parent.

What are my chances of getting sole custody?

The chances of getting sole custody vary greatly and depend on the circumstances of your case.

Most courts start with an assumption that children benefit from spending time with both parents. However, they know joint custody is not appropriate in every situation.

If you and the other parent agree on sole custody, the judge will typically approve your agreement.

If the other parent does not contest your request for sole custody, the lack of interest will typically compel a judge to award sole custody.

If the other parent decides to fight for custody, you may face a long battle. Be prepared to show why sole custody would be in the child's best interest and provide proof of any allegations you make.

A mother who gives birth while unmarried automatically has sole custody of her child until a court rules otherwise or until she and the father officially acknowledge his parenthood.

Also, a child's only living parent usually has sole custody.

Otherwise, your best option for getting full child custody without a trial is to reach an agreement with the other parent. If you decide together that your child would benefit from sole custody, write this in your custody agreement. Include details about any decisions the noncustodial parent can make for your child, when your child will spend time with that parent and how you'll support their relationship.

The easiest way to make a sole custody agreement

Creating a custody agreement on your own can feel overwhelming. You have to be sure to use airtight legal language and can't omit any required information.

Use technology to take the guesswork out of the equation. The Custody X Change app walks you through each step of creating a comprehensive custody agreement.

You can include a visitation calendar for the noncustodial parent, plus parenting stipulations, such as forbidding alcohol consumption during visits.

The result is a professional document that demonstrates your competence as a parent and secures your child's future.

The easiest, most reliable way to make a custody agreement is with Custody X Change.