In Ohio, child custody is now referred to as the allocation of parental rights and responsibilities, and visitation is called parenting time. Still, the official terms are used interchangeably with custody and visitation outside of court.

If parents are unable to settle a case, the court decides parental rights and responsibilities, as well as parenting time, through a trial.

Keep in mind, every case is different and procedures in your county may vary slightly.

Ohio has two courts that can make custody decisions: juvenile and domestic relations courts. In small counties (e.g., Adams, Noble) they are in one courthouse called the common pleas court. In large counties (e.g., Franklin, Cuyahoga) they have separate locations.

Your parental rights and responsibilities court order will state who has residential and legal custody of your children. 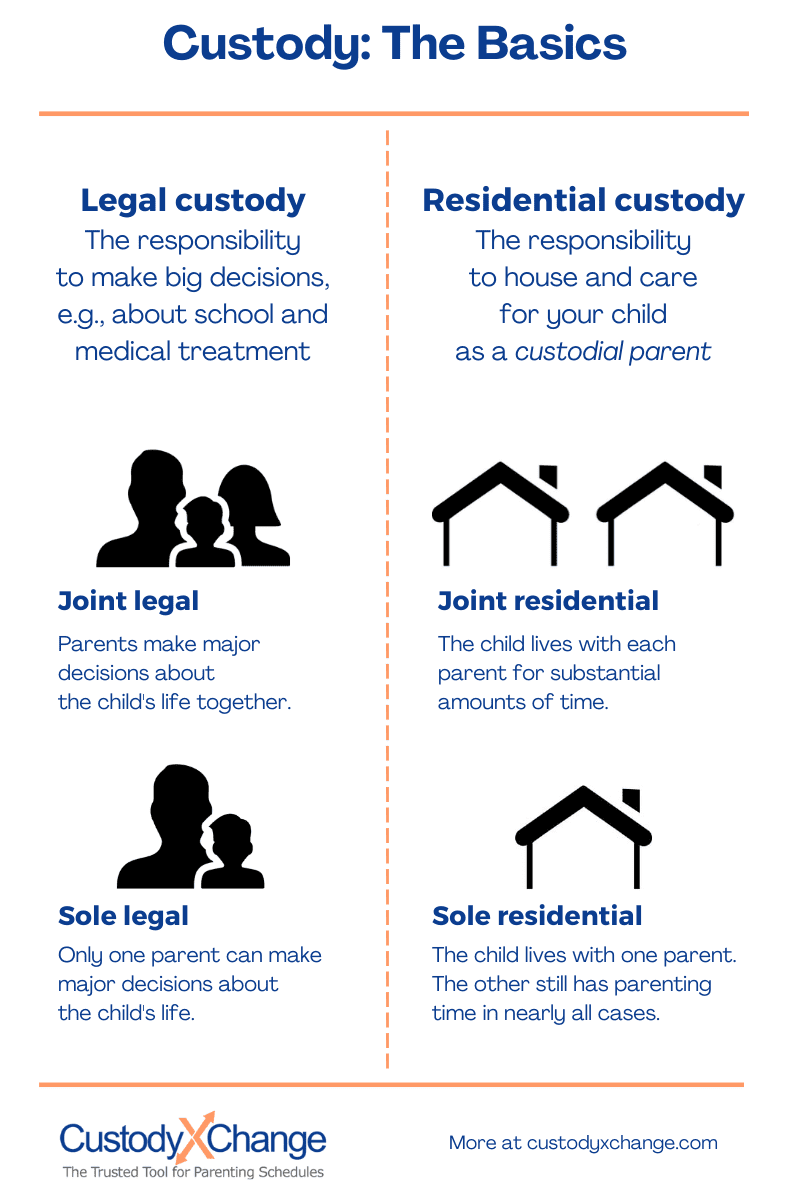 Residential custody refers to whom the children live with and who is responsible for their supervision.

In joint residential custody, the children live with each parent for nearly equal time.

If the spend time with both parents, as they do in the vast majority of cases, the family will require a parenting time schedule.

Legal custody is the right to make decisions for your children about important issues, such as education, medical care and religious upbringing.

Sole legal custody means only one parent has decision-making rights.

Joint legal custody gives both parents decision-making privileges. The family's parenting plan specifies how parents will divide or collaborate on major decisions for the children.

Under shared parenting, both parents have legal and residential custody. In most cases, one parent is designated as the residential parent for school enrollment purposes, meaning the children enroll in the school district where that parent resides.

Shared parenting is most common when parents settle. The court awards shared parenting to litigating parents only if they cooperate extremely well and live near each other.

Regardless of which court hears your custody case, the judicial officer (judge or magistrate) who hears your case will rule based on the best interests of the children involved.

The court awards custody to the parent or parents who demonstrate they can care for the children. It does not consider race, financial status, religion, sexual orientation or gender. Generally, judges prefer to keep both parents substantially involved in their children's lives.

The court also considers the children's:

The court may also use reports from investigations, forensic evaluations or a guardian ad litem to make a custody determination.

When parents aren't married to each other, the mother has sole legal and residential custody of her children until a judicial officer rules otherwise. The presumed father has no parental rights or responsibilities until the courts confirm paternity and issue parenting orders. Once paternity is confirmed, either parent can file for child support.

Married parents have equal parental rights of children born during their marriage until a judicial officer rules otherwise. If a child is born within 300 days of a divorce, the ex-husband is the presumed father of the child. However, the alleged father can challenge paternity.

The length of the court process varies based on your court, the judicial officer's schedule, the number of issues to be decided and whether an evaluation is necessary.

Divorce cases often take many months to resolve due to the issues involved beyond custody. Parents sometimes settle custody and take other issues to trial, but their shared parenting agreement doesn't become a final order until the divorce is finalized.

Note that pregnancy will pause proceedings, since custody cannot be established for an unborn child.

The cost of a custody case depends on its length, the professionals involved and where you live in Ohio, among other factors.

In addition, you may need to pay for the services of a guardian ad litem or a forensic evaluator, which can each cost thousands of dollars.

Attorneys may charge anywhere from $150 to $550 per hour based on their location, schooling, experience and more. A retainer fee (like a down payment) is paid up front.

Low income litigants may qualify for free or reduced-fee legal representation. This may be provided through the court, a local legal aid office or other social service programs.

To reduce attorney fees, settle your case as quickly as possible. Cases that settle early can cost about $2,000 to $3,000 in attorney fees. Alternative dispute resolution can help you reach a settlement.

Hiring a limited scope attorney is another cost effective way to get legal help. In this arrangement, the attorney works only on specific aspects of your case. This is recommended over representing yourself entirely (more below).

Those who litigate abusively (e.g., make false claims or open a case just to harass the other party), can be ordered to pay the other party's attorney fees, in addition to their own.

Although it is not recommended, you may represent yourself. As a pro se (self-representing) litigant, you must abide by the same laws and rules as an attorney.

Pro se representation is more common in juvenile court than domestic relations court because the process there is less complicated.

If you choose to litigate on your own in either court, familiarize yourself with all the resources available to parents seeking custody. Many lawyers offer free or low-cost consultations before you begin your case.

Alternative dispute resolution methods such as mediation do not require an attorney and allow you to form a resolution with the other parent on your own behalf.

If you and the other parent reach an agreement on your own, have your paperwork looked over by a legal professional.

Court hearings and trials are open to the public. A judicial officer may occasionally exclude the public from the courtroom for security reasons or to otherwise protect the parties involved, such as in a high profile case.

Court records are generally accessible to the public. Exceptions include forensic evaluation reports and transcripts from a child's private hearing, which are often inaccessible even to parents.

Victims of domestic violence may request to conceal their address and other identifying information on court records.

For more about parental rights and responsibilities, see Chapter 3109 of the Ohio Revised Code.

The process of deciding parental rights and responsibilities requires serious organization. You may need to create a parenting plan, draft multiple parenting time schedules, track your time with your child, calculate expenses and beyond.

The Custody X Change app enables you to do all of that in one place.

With a parenting plan template, custody calendars, an expense tracker and more, Custody X Change makes sure you're prepared for whatever arises in your journey to child custody.

Take advantage of our technology to stay on top of all the moving parts of your case.

Settling out of court