Statistics: Hire a Divorce Attorney for the Best Custody Outcome

Study shows parents most likely to settle, share custody when both have attorney (+ other stats)

The study also found that low-income parents were less likely than other parents to have a lawyer or receive joint custody. In addition, these parents tended to have worse ongoing relationships with their former spouses, and their children tended not to adjust as well.

Custody X Change questioned 1,000 U.S. adults who finalized a divorce involving child custody in the past two years. It used the Pollfish survey platform, and the margin of error was four percent. Download the survey results spreadsheet.

"It seems that when both parents have attorneys, the attorneys encourage their clients to reach a co-parenting agreement rather than go to trial," said Ben Coltrin, Custody X Change cofounder and president. "That's important for parents to consider as they decide whether to hire a lawyer."

Coltrin added that more research is needed to show cause and effect between any factors in the study. Still, he said, "the information is enlightening because data on child custody cases is hard to come by." 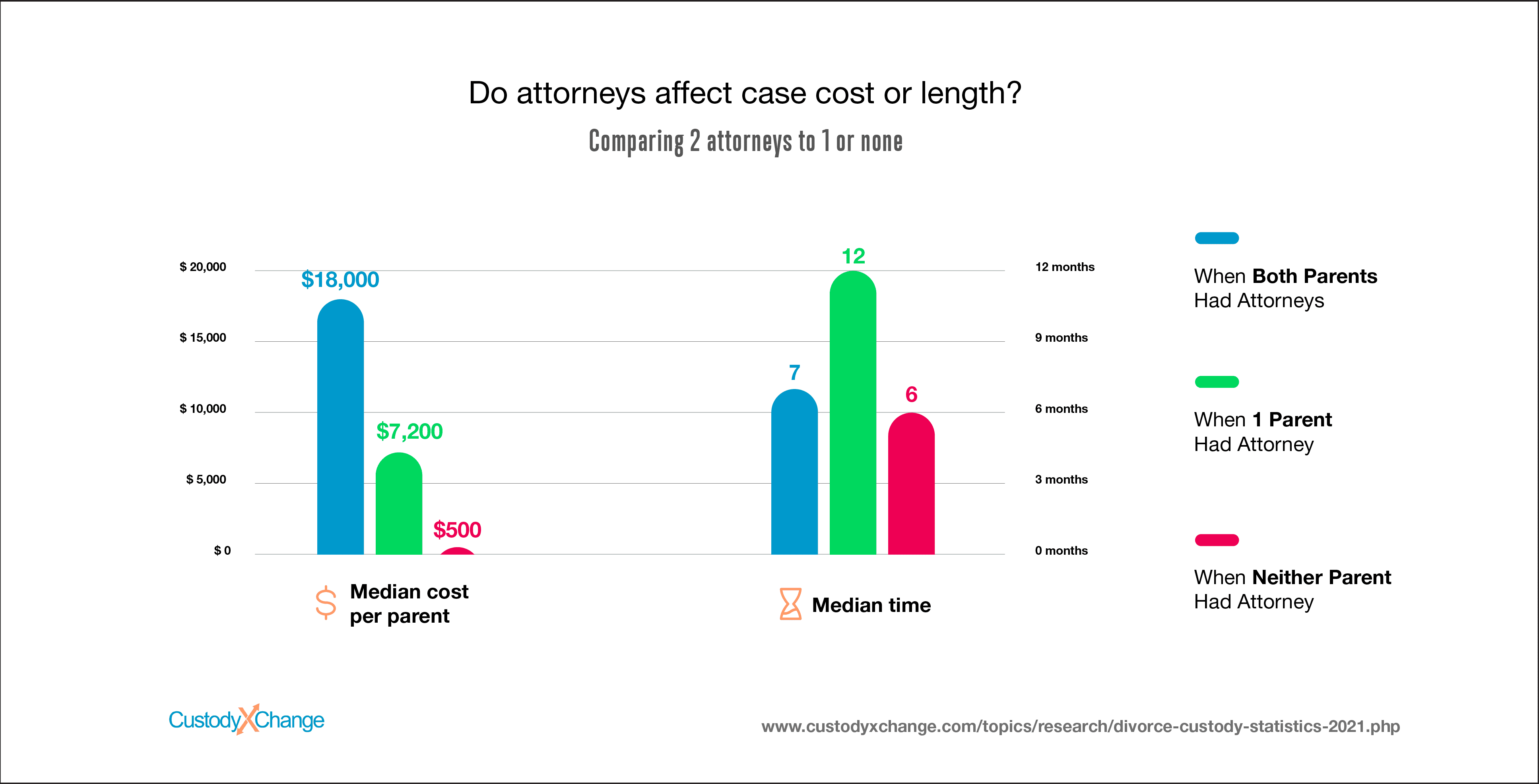 Two-attorney cases also resulted in joint physical custody at the highest rate — 82 percent. Cases with one parent represented and cases with neither parent represented both ended in joint custody about 70 percent of the time. This is meaningful because child experts consider joint physical custody — in which a child spends significant time with each parent — best for children, except in rare instances.

Having only one parent represented was tied to unique challenges.

These cases were the least likely to settle.

Interestingly, single-lawyer cases cost respondents several thousand dollars regardless of which parent had the lawyer. Respondents still spent a median of almost $6,000 on the legal process if only their former spouse had a lawyer.

Just 65 percent of these parents had a lawyer, whereas 84 percent of other parents did.

Thirty percent of low-income parents reported getting along with their former spouse extremely or very well now, compared to 48 percent for other income levels.

The lower relationship rating may be tied to the fact that fewer low-income parents used alternative dispute resolution (ADR) methods, such as mediation. Most ADR methods focus on helping parents communicate with each other. Overall, parents who used ADR were almost twice as likely to rate their relationship highly following the divorce.*

Disparity extended to children of low-income parents. Only 43 percent of respondents with a low income said their kids adjusted extremely or very well following the divorce, while 61 percent of other parents said so.

Other divorce and custody findings

Overall, 79 percent of survey respondents had a lawyer. Seventy percent of those people were satisfied with their lawyer.

Most parents seemed pleased with their experience. Just more than half of parents gave the legal process a positive rating ("better than I ever imagined" or "good"), and roughly the same amount said their kids adjusted extremely or very well. Over 70 percent of respondents were extremely or moderately satisfied with their case outcome.

The median time to resolve a case was eight months, from the start of negotiations to the final ruling. The median cost was $12,000. This included fees paid to attorneys, mediators and the court, but not child support, spousal support or division of assets.

In total, 79 percent of respondents reached a custody settlement. These parents reported less dissatisfaction with their case outcome and less maladjustment by their children.

Of the 78 percent of all cases that resulted in joint physical custody, nearly half had parents split their time with the children evenly.

*Many courts require parents in custody cases to attempt ADR unless the case has a settlement ready or involves domestic violence. The proportion of parents who settled without ADR was around 70 percent whether or not respondents had a low income. This suggests that reasons for opting out of ADR were similar between the two groups.