November 17, 2020 — Many separating parents mistakenly think their child can choose whom to live with.

In reality, Georgia is the only U.S. state that lets a child choose who takes physical custody of them. Even then, the child must be 14 or older, and their choice must be approved by a judge.

Thirteen states don't have statutes requiring a judge to consider a child's preference when deciding custody. All other states (plus Washington, D.C.) do; judges there must take the views of mature children into account. 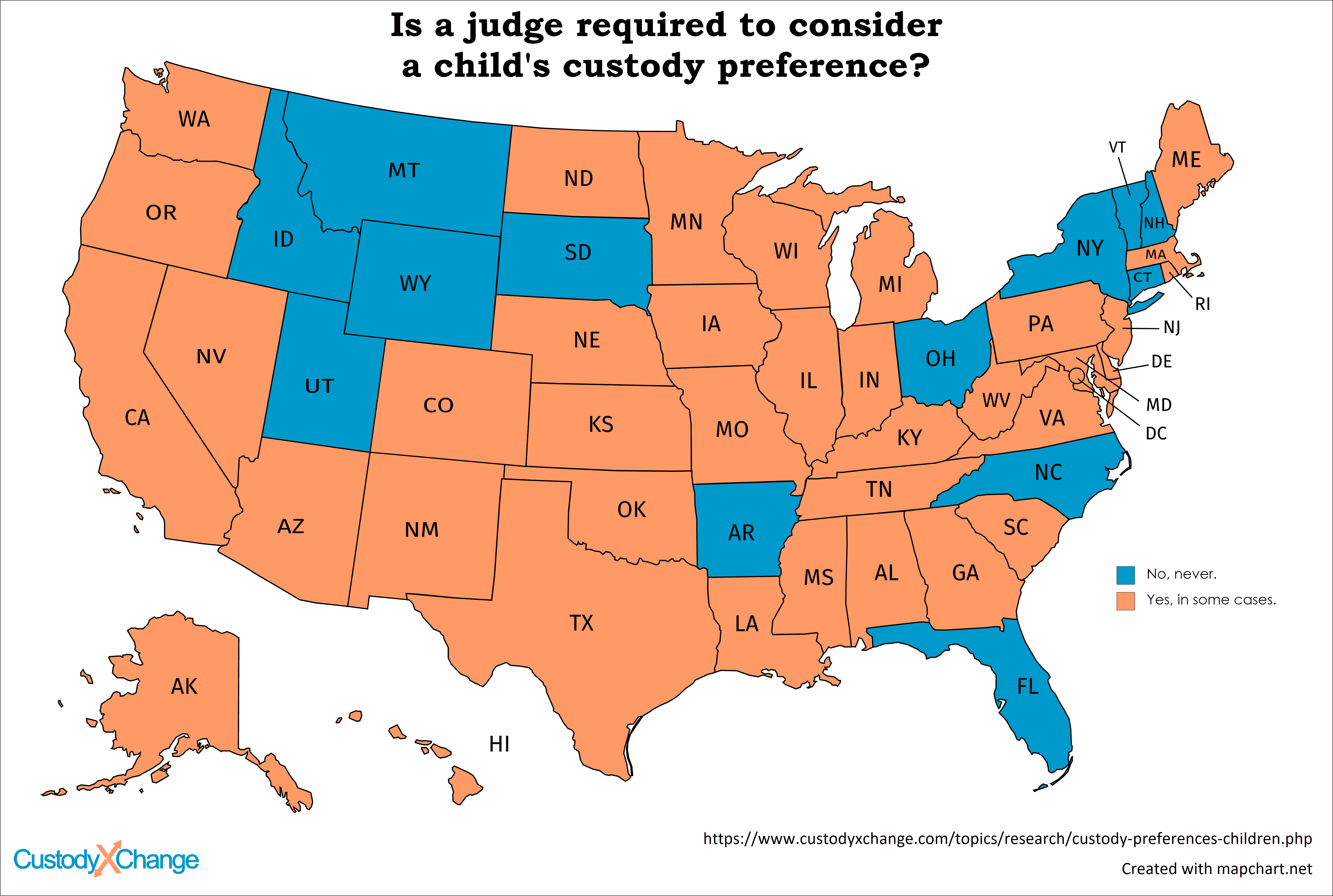 These findings come from an analysis of current state statutes by Custody X Change, which offers parents a web app for managing custody via parenting plans, calendars, expense tracking and more. (Scroll to end for full state-by-state data.)

"If you go to court over custody, you need to understand your state's approach to many topics, including a child's right to share their opinion," said Ben Coltrin, Custody X Change co-founder and president. "There's debate over what's more important: letting a child have a say or shielding them from parental disputes. How your state and judge view the issue will affect your case."

It's important to note that most custody decisions are made by parents in settlement agreements; these parents can consider their child's opinion however they want. When parents can't reach agreement, then a judge decides what custody arrangement would serve the child's best interests.

Once the court issues a custody order, the child must comply. This means your son or daughter cannot refuse to see a parent who has been awarded custody or visitation time.

How old must a child be to weigh in?

All states allow judges to consider the preference of a child in a custody case, as long as the child is sufficiently mature. And, as we saw above, a large portion of states require judges to take a mature child's opinion into account.

So when is a child mature? Most states don't set a specific age, instead letting judges decide case by case.

When statutes do cite an age, 14 is most common. Three states (California, New Mexico and West Virginia) presume children 14 and older are sufficiently mature, while two (Indiana and Utah) give extra weight to the opinions of kids in this range.

Another four states (Mississippi, Oklahoma, Tennessee and Texas) presume children 12 and up are mature enough to form a preference worth examining.

Georgia law sets the youngest age. It says children 11 and up can share their thoughts with the court. (And, remember, Georgia kids at least 14 years old can choose which parent to live with, although a judge can override the choice if necessary.)

All these states give judges leeway to hear from younger children who seem particularly mature. 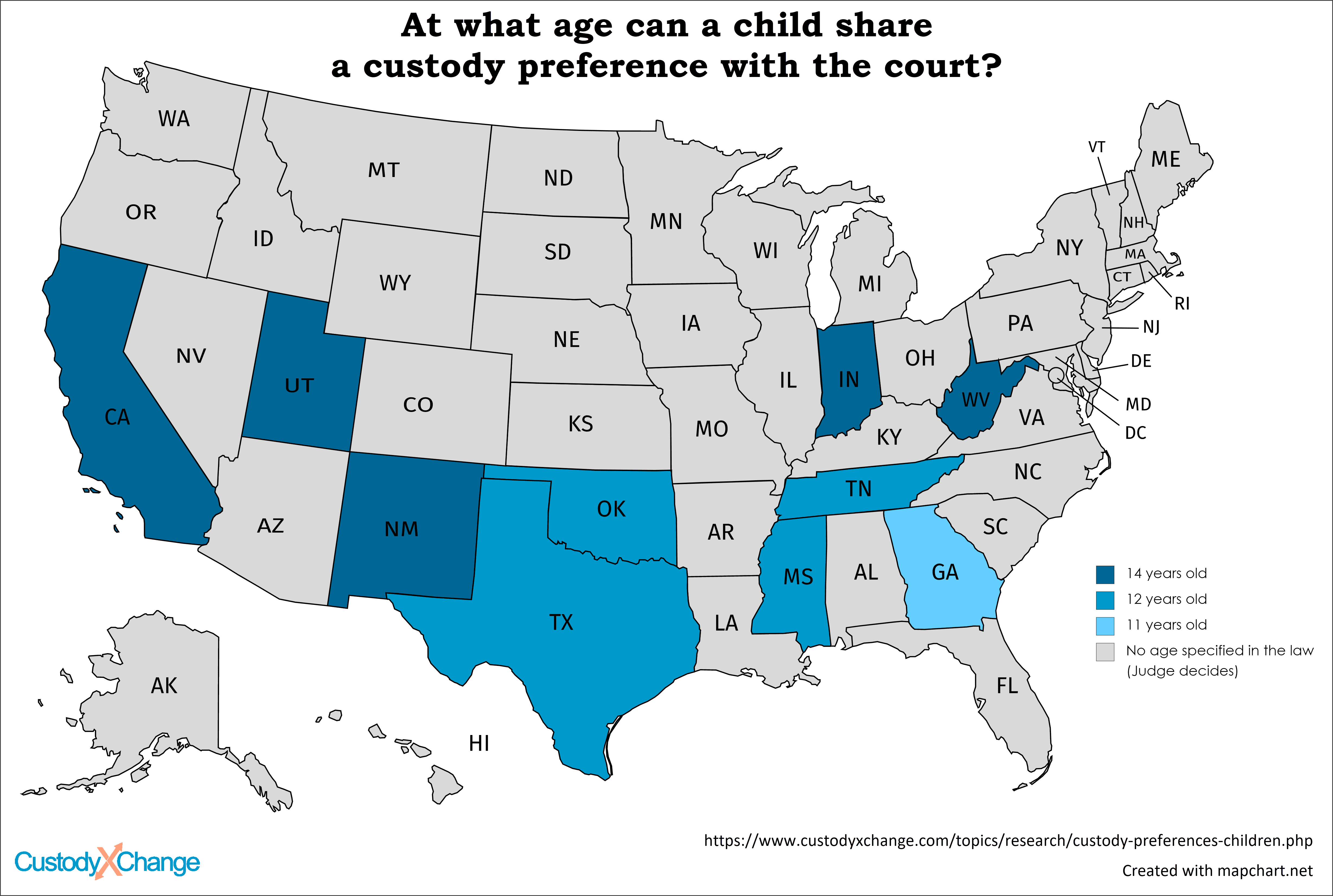 Overall, the older a child is, the more impact their wishes have on their custody case.

If your child is at least 14, a judge in any state is likely to hear what they have to say. On the other hand, a child in the single digits probably won't get to weigh in. Children between these two groups fall in a gray area, and whether they can provide input depends on their state, judge and maturity level.

Nationwide, children 14 and above can usually weigh in on custody rulings. Children 9 and under usually can't. The rest fall in a gray area.

How a child's opinion fits into the big picture

A judge never has to award custody according to a child's wishes. Other factors — such as each parent's criminal history and bond with the child — always come into play.

In addition, a judge tries to assess whether a child's preference for one parent is due to persuasion or leniency by that parent, which would give the preference less validity from the court's perspective.

For example, a 15-year-old may not get to live with her mom as she wishes if evidence shows the mother lets her drive without a license. In contrast, a 12-year-old with concrete reasons for preferring a suitable parent could have considerable influence on a judge's ruling.

Children typically do not testify about their preferences in court because the experience can be emotional and frightening.

Instead, they usually share their thoughts in conversation with the judge, a custody evaluator or someone appointed by the court to represent their interests (like a guardian ad litem). In Georgia, a child who's at least 11 can turn in a written affidavit.

Interviews with the judge take place in the judge's office and are thus known as in-chambers or in-camera hearings. Generally, a court reporter and the child's legal representative attend. Sometimes the parents' lawyers are also allowed in but not the parents themselves.

Some judges ask the child directly whom they'd like to live with, while others only ask related questions like, "What do you do for fun with your mom?" In certain states, both parents must consent before the child may speak with a judge. Other factors that vary include whether parents can suggest questions for the interview and whether they can read the transcript.