How much is child support in your state?

June 10, 2019 — The size of your child support payment depends heavily on where you live, according to research from Custody X Change. 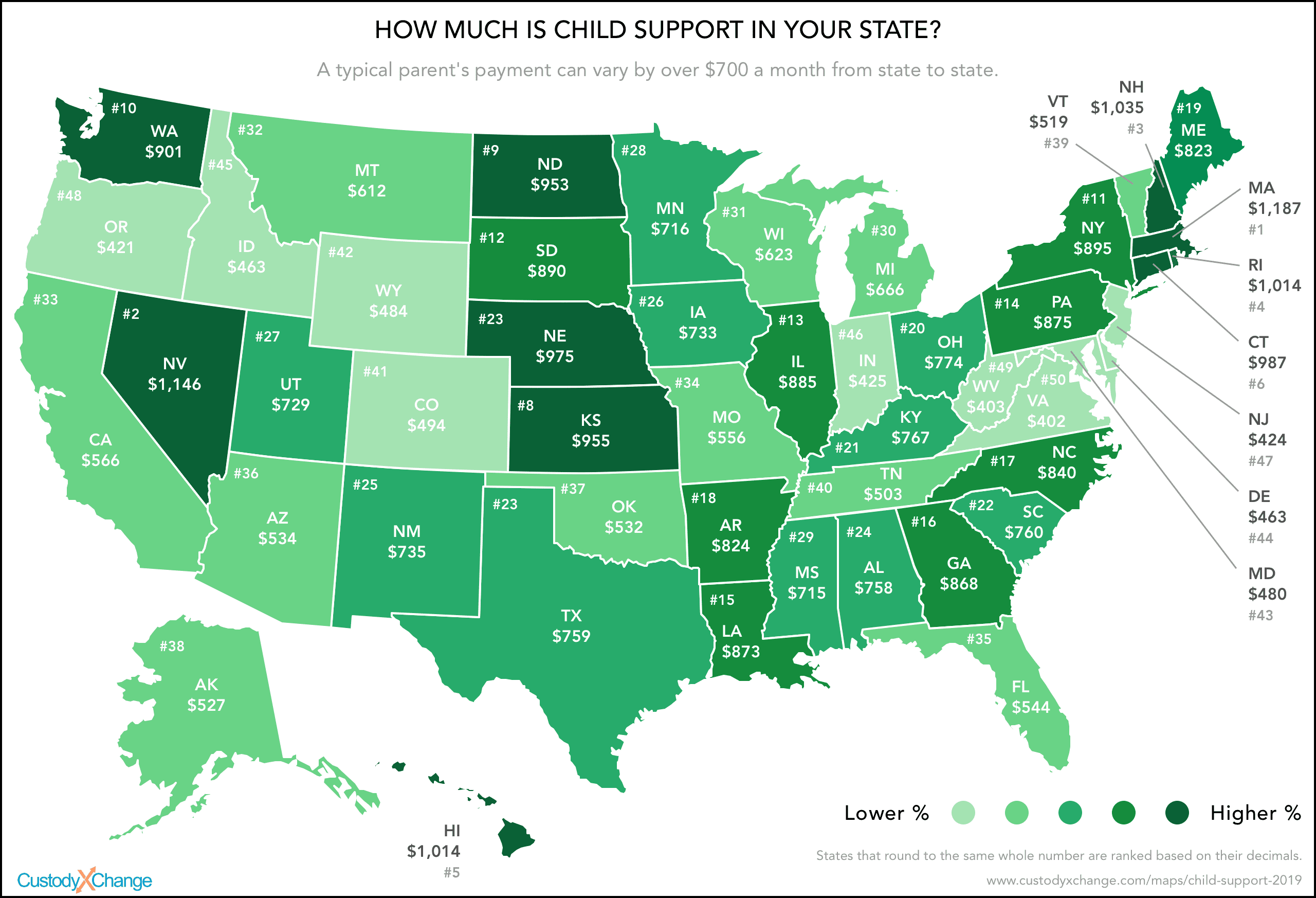 A parent can pay three times as much as one who lives in a state just six hours away, despite their circumstances being otherwise equal. When a Virginia parent would pay $400 a month in child support, a Massachusetts parent in the same situation would pay nearly $1,200, per state guidelines.

The study looks at a hypothetical family with two children, ages 7 and 10. The mother has 65 percent of parenting time (the most common timeshare awarded to a U.S. mother, according to previous research). She makes $45,000 a year, while the father makes $55,000 (based on data about typical parental incomes from Pew Research Center).

Researchers entered this information into each state's child support formula to discover that the father's payment could range from $402 a month to $1,187 a month. (See the full table of state rankings at the end of this page.) Nationally, he would pay an average of $721 monthly.

These totals reflect how much a state presumes the noncustodial parent should pay (the "guideline" amount), but judges have the discretion to award different amounts based on evidence. In some cases, parents can decide together how much support will be exchanged.

The study does not utilize any data from Custody X Change users.

"Child support is complex," said Ben Coltrin, Custody X Change co-founder and president. "States don't want to set a payment too low, leaving a child's needs unmet. At the same time, they don't want to set a payment so high that the parent can't afford it. We hope this data furthers dialogue about how to determine the right support for each family." 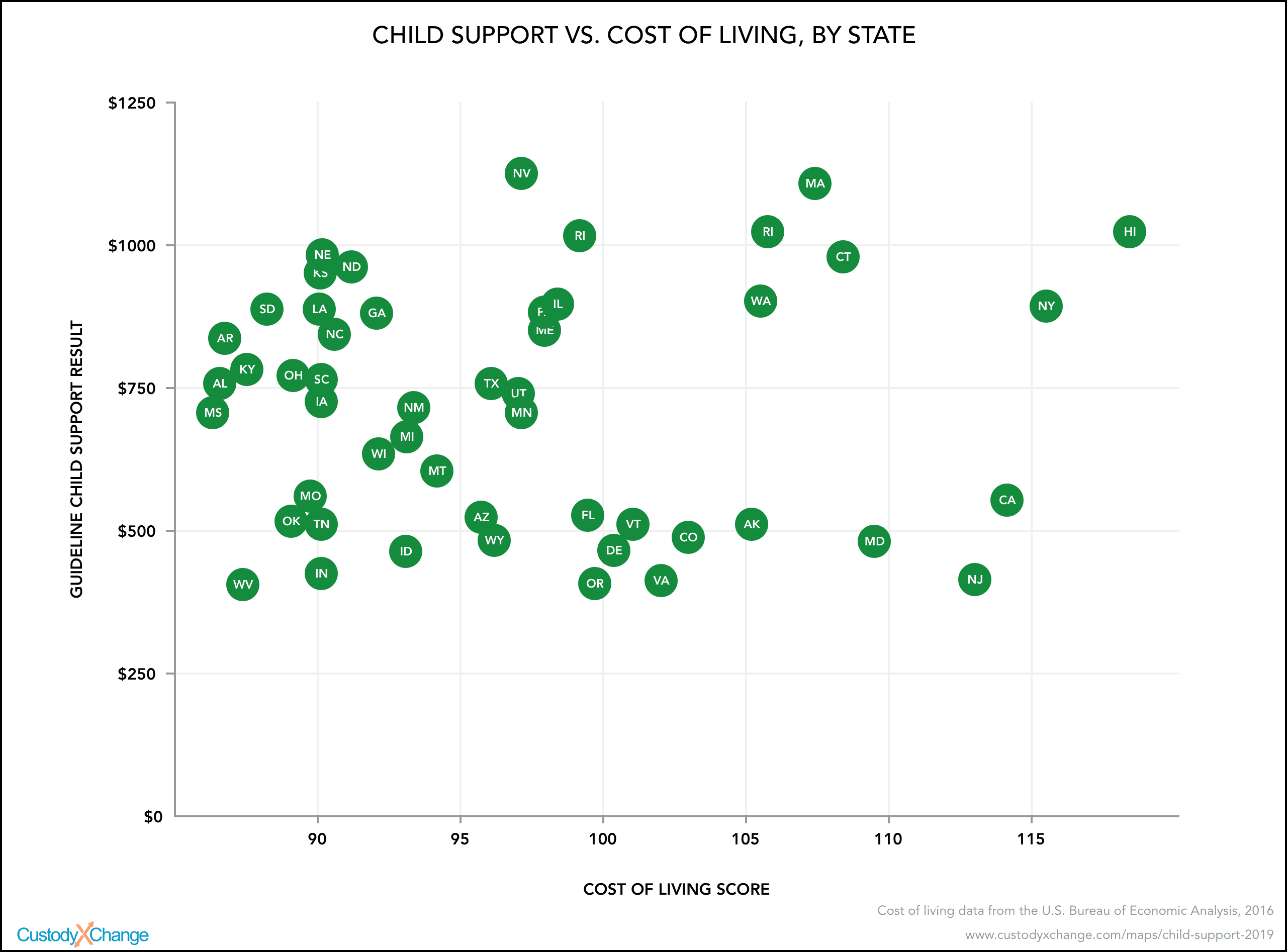 Political leaning also fails to provide an explanation for the variation in support. Average awards from Republican and Democratic states for this mother are just $13 apart ($702 and $715 a month, respectively).

Historically, many states calculated child support by taking a percentage of money earned by the parent who spent less time with the child. As the number of working mothers has ballooned in recent decades, most states have moved to formulas that factor in both parents' incomes. Arkansas will become the latest state to make this move, by March.

For the family in the study, formulas that look only at the father's earnings produce high totals. This is because they don't consider that the hypothetical parents have similar income levels.

If the mother's income were to drop, the presumed awards in the same four states could be among the lowest in the country; they would remain static while the awards in other states would increase.

The Rocky Mountain region awards this mother the least child support: $556 a month, on average.

New England awards the most; at $928 a month, its average is 67 percent higher than that of the Rocky Mountain region. Vermont is a New England outlier, with the 12th lowest payment in the nation ($519), but it's not enough to knock New England out of the top spot. 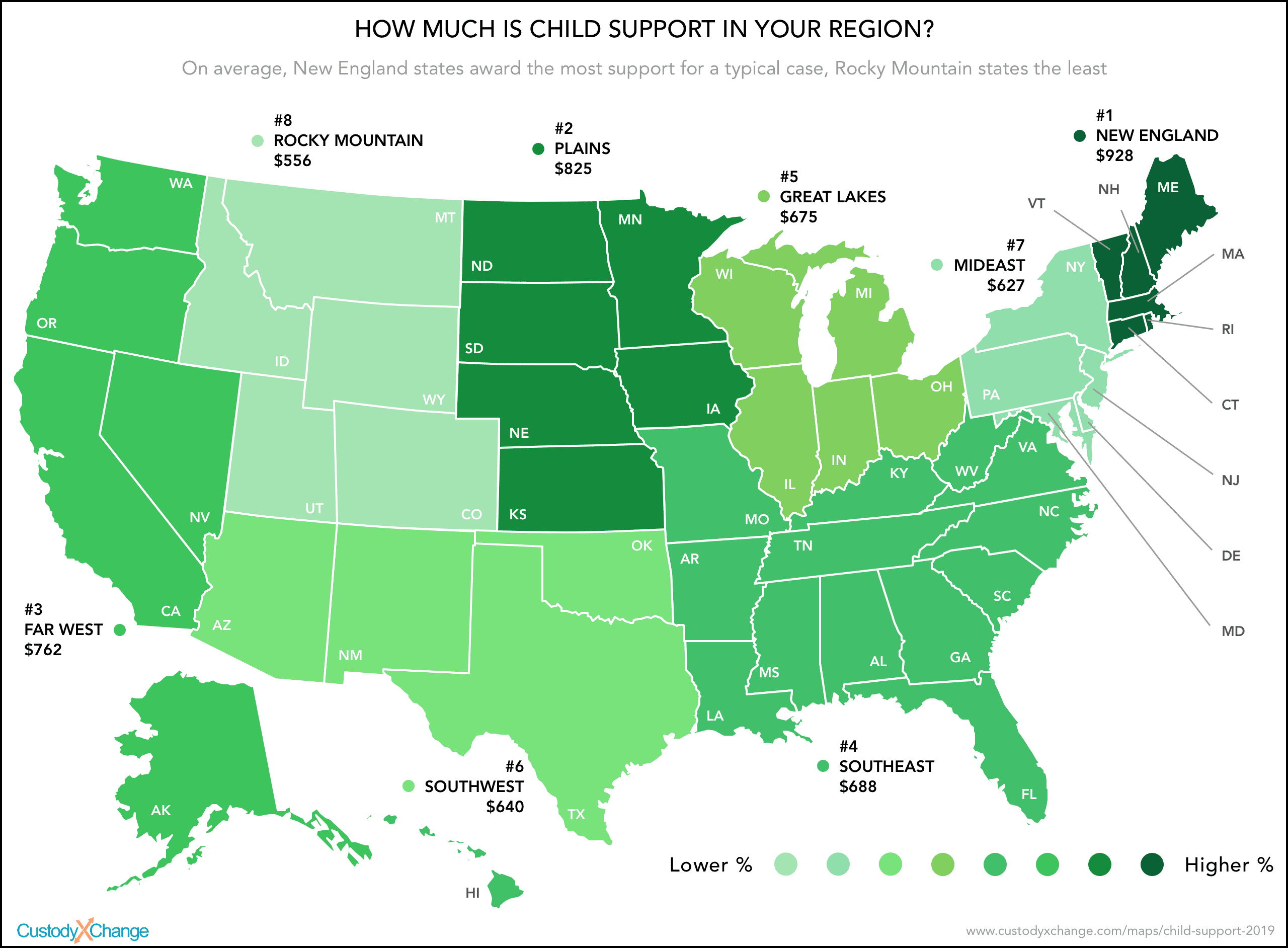 For a full breakdown of calculations by region, visit the appendix.

Different approaches to setting guidelines may be behind variation

The federal government requires every state to develop child support guidelines, which help courts determine the appropriate award in any case. The government introduced this requirement in the 1980s after studies showed major inconsistencies in how judges were awarding support, both within and among states.

States choose how to set their guidelines. A few have worked with researchers to measure the cost of raising a child there. Others have used existing research (which may employ data from another state or at the national level), or they haven't referred specifically to any evidence. The difference in approaches likely contributes to the difference in awards across the country.

"We hope this data furthers dialogue about how to determine the right support for each family."
-Ben Coltrin, Custody X Change President

Even among states that point to research, the studies they consult vary in methodology and age. The most common source is the Consumer Expenditure Survey from the U.S. Bureau of Labor Statistics. Since it doesn't offer data at the state level, some states have adjusted its data to try to match their cost of living. Other state-specific modifications to data and models further add to the lack of uniformity in awards across the U.S.

By law, each state must convene a panel to review its guidelines every four years.

Most states have overhauled their child support formulas significantly as American families have changed. Guidelines once assumed mothers worked less than fathers, if at all. In addition, they were often based on the presumption that parents had at one point been married to each other.

Today, much of the debate around child support concentrates on finding an amount that provides for the child without leaving the paying parent destitute. Some states have found that lowering payments or forgiving outstanding payments can increase overall child support collection numbers, as the payers are better able to afford their obligation.


*States that round to the same whole number are ranked based on their decimals.

For more information on the study, see the appendix.